There are two models in complexity. Complex Physical Systems and Complex Adaptive Systems! For us to grasp the patterns that are evolving, and much of it seemingly out of our control – it is important to understand both these models. One could argue that these models are mutually exclusive. While the existing body of literature might be inclined toward supporting that argument, we also find some degree of overlap that makes our understanding of complexity unstable. And instability is not to be construed as a bad thing! We might operate in a deterministic framework, and often, we might operate in the realms of a gradient understanding of volatility associated with outcomes. Keeping this in mind would be helpful as we deep dive into the two models. What we hope is that our understanding of these models would raise questions and establish mental frameworks for intentional choices that we are led to make by the system or make to influence the evolution of the system.

Complex Physical Systems are bounded by certain laws. If there are initial conditions or elements in the system, there is a degree of predictability and determinism associated with the behavior of the elements governing the overarching laws of the system. Despite the tautological nature of the term (Complexity Physical System) which suggests a physical boundary, the late 1900’s surfaced some nuances to this model. In other words, if there is a slight and an arbitrary variation in the initial conditions, the outcome could be significantly different from expectations. The assumption of determinism is put to the sword.  The notion that behaviors will follow established trajectories if rules are established and the laws are defined have been put to test. These discoveries by introspection offers an insight into the developmental block of complex physical systems and how a better understanding of it will enable us to acknowledge such systems when we see it and thereafter allow us to establish certain toll-gates and actions to navigate, to the extent possible, to narrow the region of uncertainty around outcomes.

Complexity behavior in nature reflects the tendency of large systems with many components to evolve into a poised “critical” state where minor disturbances or arbitrary changes in initial conditions can create a seemingly catastrophic impact on the overall system such that system changes significantly. And that happens not by some invisible hand or some uber design. What is fundamental to understanding complex systems is to understand that complexity is defined as the variability of the system. Depending on our lens, the scale of variability could change and that might lead to different apparatus that might be required to understand the system. Thus, determinism is not the measure: Stephen Jay Gould has argued that it is virtually impossible to predict the future. We have hindsight explanatory powers but not predictable powers. Hence, systems that start from the initial state over time might represent an outcome that is distinguishable in form and content from the original state. We see complex physical systems all around us. Snowflakes, patterns on coastlines, waves crashing on a beach, rain, etc.

Complex adaptive systems, on the contrary, are learning systems that evolve. They are composed of elements which are called agents that interact with one another and adapt in response to the interactions. 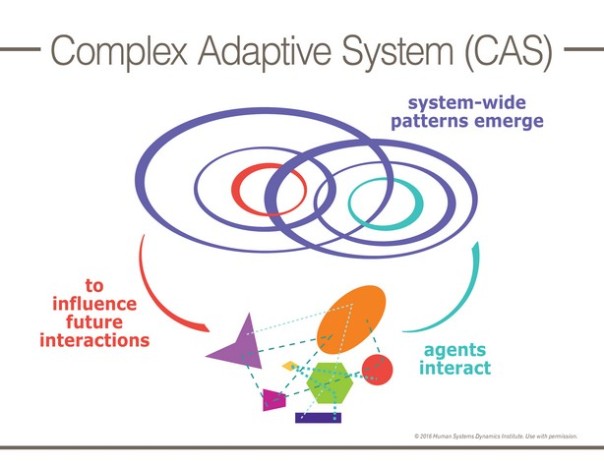 Markets are a good example of complex adaptive systems at work.

One of the theories that have been presented is that of building blocks. CAS innovation is a result of reconfiguring the various components in new ways. One quips that if energy is neither created, nor destroyed …then everything that exists today or will exist tomorrow is nothing but a reconfiguration of energy in new ways. All of tomorrow resides in today … just patiently waiting to be discovered. Agents create hypotheses and experiment in the petri dish by reconfiguring their experiences and other agent’s experiences to formulate hypotheses and the runway for discovery. In other words, there is a collaboration element that comes into play where the interaction of the various agents and their assignment as a group to a rule also sets the stepping stone for potential leaps in innovation.

Another key characteristic of CAS is that the elements are constituted in a hierarchical order. Combinations of agents at a lower level result in a set of agents higher up and so on and so forth. Thus, agents in higher hierarchical orders take on some of the properties of the lower orders but it also includes the interaction rules that distinguishes the higher order from the lower order.