Complexity theory needs to be coupled with network theory to get a more comprehensive grasp of the underlying paradigms that govern the outcomes and morphology of emergent systems. In order for us to understand the concept of network effects which is commonly used to understand platform economics or ecosystem value due to positive network externalities, we would like to take a few steps back and appreciate the fundamental theory of networks. This understanding will not only help us to understand complexity and its emergent properties at a low level but also inform us of the impact of this knowledge on how network effects can be shaped to impact outcomes in an intentional manner.

There are first-order conditions that must be met to gauge whether the subject of the observation is a network. Firstly, networks are all about connectivity within and between systems. Understanding the components that bind the system would be helpful. However, do keep in mind that complexity systems (CPS and CAS) might have emergent properties due to the association and connectivity of the network that might not be fully explained by network theory. All the same, understanding networking theory is a building block to understanding emergent systems and the outcome of its structure on addressing niche and macro challenges in society.

Networks operates spatially in a different space and that has been intentionally done to allow some simplification and subsequent generalization of principles. The geometry of network is called network topology. It is a 2D perspective of connectivity.

Networks are subject to constraints (physical resources, governance constraint, temporal constraints, channel capacity, absorption and diffusion of information, distribution constraint) that might be internal (originated by the system) or external (originated in the environment that the network operates in). 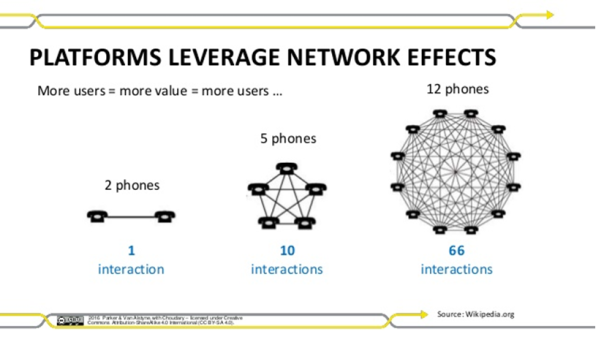 Finally, there is an inherent non-linearity impact in networks. As nodes increase linearly, connections will increase exponentially but might be subject to constraints. The constraints might define how the network structure might morph and how information and signals might be processed differently.

Graph theory is the most widely used tool to study networks. It consists of four parts: vertices which represent an element in the network, edges refer to relationship between nodes which we call links, directionality which refers to how the information is passed ( is it random and bi-directional or follows specific rules and unidirectional), channels that refer to bandwidth that carry information, and finally the boundary which establishes specificity around network operations. A graph can be weighted – namely, a number can be assigned to each length to reflect the degree of interaction or the strength of resources or the proximity of the nodes or the ordering of discernible clusters.

The central concept of network theory thus revolves around connectivity between nodes and how non-linear emergence occurs. A node can have multiple connections with other node/nodes and we can weight the node accordingly. In addition, the purpose of networks is to pass information in the most efficient manner possible which relays into the concept of a geodesic which is either the shortest path between two nodes that must work together to achieve a purpose or the least number of leaps through links that information must negotiate between the nodes in the network.

Technically, you look for the longest path in the network and that constitutes the diameter while you calculate the average path length by examining the shortest path between nodes, adding all of those paths up and then dividing by the number of pairs. Significance of understanding the geodesic allows an understanding of the size of the network and throughput power that the network is capable of.

Nodes are the atomic elements in the network. It is presumed that its degree of significance is related to greater number of connections. There are other factors that are important considerations: how adjacent or close are the nodes to one another, does some nodes have authority or remarkable influence on others, are nodes positioned to be a connector between other nodes, and how capable are the nodes in absorbing, processing and diffusing the information across the links or channels. How difficult is it for the agents or nodes in the network to make connections? It is presumed that if the density of the network is increased, then we create a propensity in the overall network system to increase the potential for increased connectivity.

As discussed previously, our understanding of the network is deeper once we understand the elements well. The structure or network topology is represented by the graph and then we must understand size of network and the patterns that are manifested in the visual depiction of the network. Patterns, for our purposes, might refer to clusters of nodes that are tribal or share geographical proximity that self-organize and thus influence the structure of the network. We will introduce a new term homophily where agents connect with those like themselves. This attribute presumably allows less resources needed to process information and diffuse outcomes within the cluster. Most networks have a cluster bias: in other words, there are areas where there is increased activity or increased homogeneity in attributes or some form of metric that enshrines a group of agents under one specific set of values or activities. Understanding the distribution of cluster and the cluster bias makes it easier to influence how to propagate or even dismantle the network. This leads to an interesting question: Can a network that emerges spontaneously from the informal connectedness between agents be subjected to some high dominance coefficient – namely, could there be nodes or links that might exercise significant weight on the network? 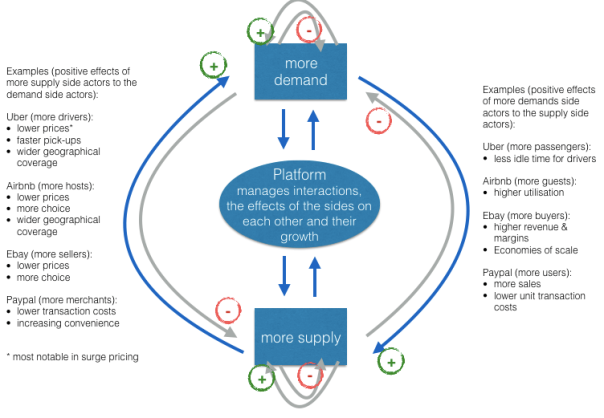 The network has to align to its environment. The environment can place constraints on the network. In some instances, the agents have to figure out how to overcome or optimize their purpose in the context of the presence of the environmental constraints.  There is literature that suggests the existence of random networks which might be an initial state, but it is widely agreed that these random networks self-organize around their purpose and their interaction with its environment. Network theory assigns a number to the degree of distribution which means that all or most nodes have an equivalent degree of connectivity and there is no skewed influence being weighed on the network by a node or a cluster. Low numbers assigned to the degree of distribution suggest a network that is very democratic versus high number that suggests centralization.  To get a more practical sense, a mid-range number assigned to a network constitutes a decentralized network which has close affinities and not fully random. We have heard of the six degrees of separation and that linkage or affinity is most closely tied to a mid-number assignment to the network. 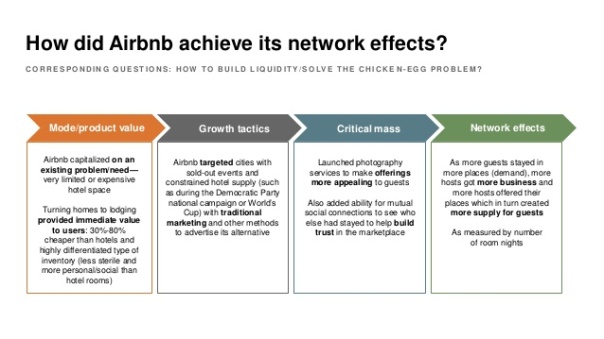 We are now getting into discussions on scale and binding this with network theory. Metcalfe’s law states that the value of a network grows as a square of the number of the nodes in the network. More people join the network, the more valuable the network. Essentially, there is a feedback loop that is created, and this feedback loop can kindle a network to grow exponentially. There are two other topics – Contagion and Resilience. Contagion refers to the ability of the agents to diffuse information. This information can grow the network or dismantle it. Resilience refers to how the network is organized to preserve its structure. As you can imagine, they have huge implications that we see.  How do certain ideas proliferate over others, how does it cluster and create sub-networks which might grow to become large independent networks and how it creates natural defense mechanisms against self-immolation and destruction?

Network effect is commonly known as externalities in economics. It is an effect that is external to the transaction but influences the transaction. It is the incremental benefit gained by an existing user for each new user that joins the network.  There are two types of network effects: Direct network effects and Indirect network effect. Direct network effects are same side effects. The value of a service goes up as the number of users goes up. For example, if more people have phones, it is useful for you to have a phone. The entire value proposition is one-sided. Indirect networks effects are multi-sided. It lends itself to our current thinking around platforms and why smart platforms can exponentially increase the network. The value of the service increases for one user group when a new user group joins the network. Take for example the relationship between credit card banks, merchants and consumers. There are three user groups, and each gather different value from the network of agents that have different roles. If more consumers use credit cards to buy, more merchants will sign up for the credit cards, and as more merchants sign up – more consumers will sign up with the bank to get more credit cards. This would be an example of a multi-sided platform that inherently has multi-sided network effects. The platform inherently gains significant power such that it becomes more valuable for participants in the system to join the network despite the incremental costs associated with joining the network. Platforms that are built upon effective multi-sided network effects grow quickly and are generally sustainable. Having said that, it could be just as easy that a few dominant bad actors in the network can dismantle and unravel the network completely. We often hear of the tipping point: namely, that once the platform reaches a critical mass of users, it would be difficult to dismantle it. That would certainly be true if the agents and services are, in the aggregate, distributed fairly across the network: but it is also possible that new networks creating even more multi-sided network effects could displace an entrenched network. Hence, it is critical that platform owners manage the quality of content and users and continue to look for more opportunities to introduce more user groups to entrench and yet exponentially grow the network.

Comments Off on Network Theory and Network Effects